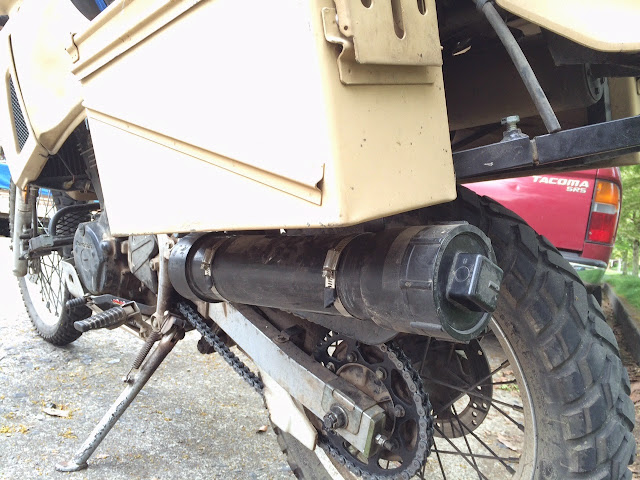 Years ago a buddy in Seattle gifted me an old tool tube that had been on his Trans Alp and I've been sitting on it trying to sort out where to put it on my bike. A lot of folks just throw it on the front of their skid plate and call it a day. While that's certainly easiest I honestly hate the idea of it tied to the skid plate and my intuition tells me that's a horrible place for it anyway (seriously none of you people have had a large rock get kicked up and shatter at that very spot?!) So here's the solution I came up with after just a little fabrication...

I thought about cutting the tube down so it'd be easier to fit elsewhere on the bike but decided to keep it full length so it could store tire irons which tend to be longer. This provided a challenge to locate a spot where it'd still be covert and out of the way. Additionally I wanted to keep the weight low to help with handling. Not that tools are THAT heavy but they weigh more than a bunch of tshirts. 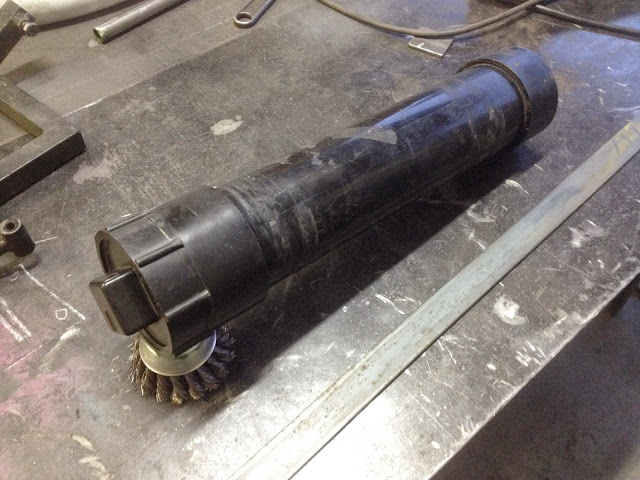 As luck would have it the tube was nearly identical in length to my ammo cans. So I welded a small extension off the bottom of the saddlebag mount. Nothing too fancy, just enough to be able to clamp the tube to it using large pipe clamps. I added a couple notches to keep the clamps from slipping off. 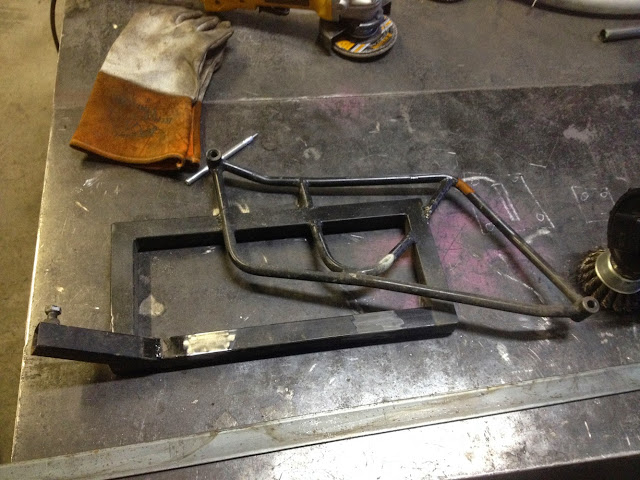 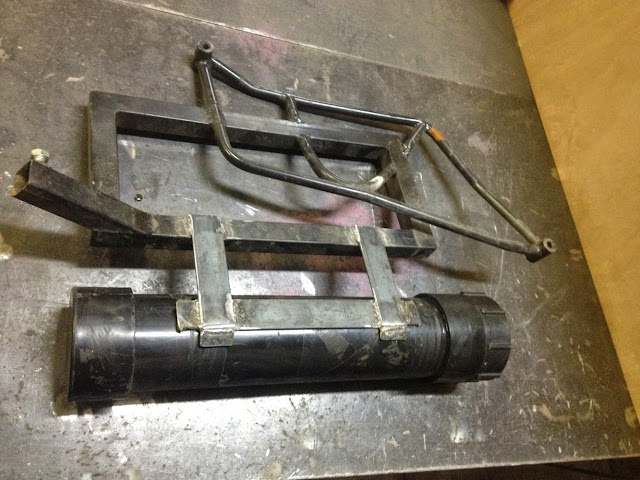 Another handy thing I've chosen to use is a bag from a Thomson bicycle seatpost. It's perfect to store all of the tools when they're in the tube. Plus the bag is long enough that I can easily grab it and pull everything out. (My hands are way too big to be able and retrieve anything from the bottom of the tube.) Plus the bag keeps the tools from vibrating against the inside of the tube (although not necessarily from vibrating against each other). 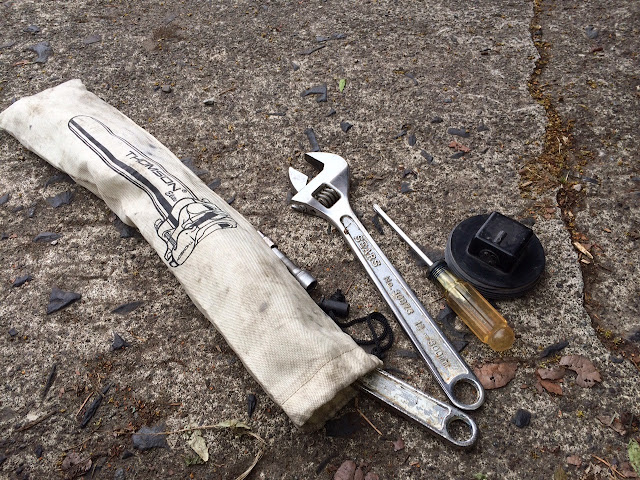 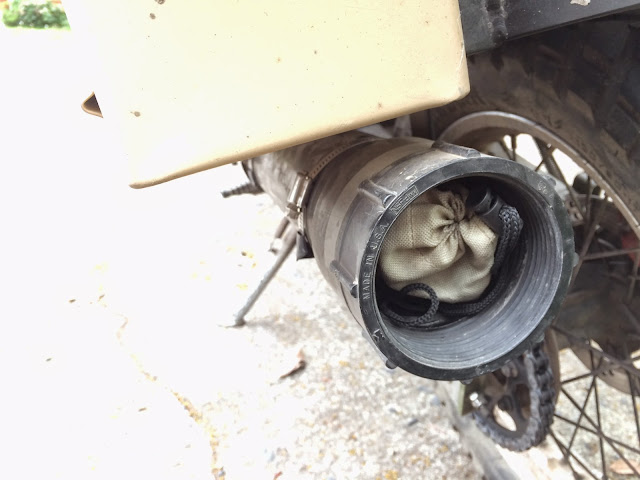 After my last trip I was really excited I finally got this tube installed, and wound up getting into it several times. It's great to have the space freed up in my luggage, and definitely nice to not have to go digging around for anything. 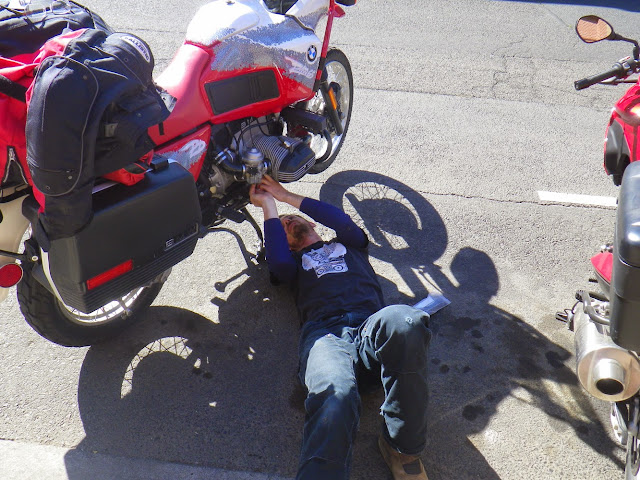 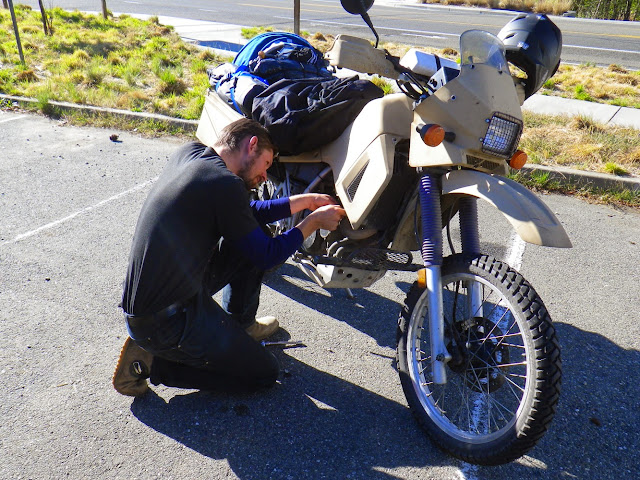 Kind of unrelated, but I found a handy spot to relocate my helmet lock to as well. It had been left off the bike ever since I installed the ammo cans. Not sure why I hadn't thought of this before... 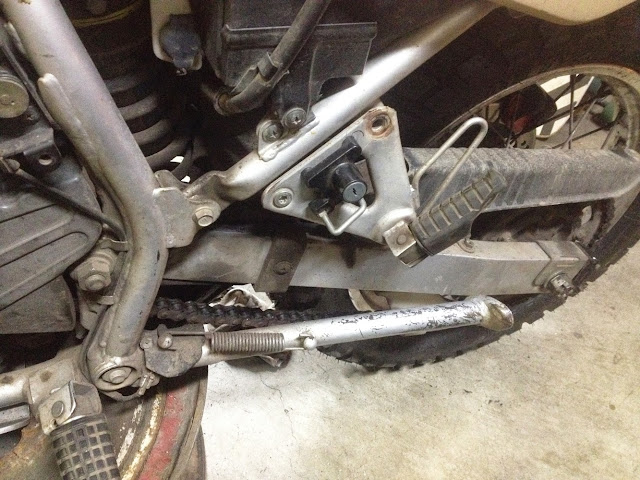 It's on the drive side so my helmet is slightly more protected from the rain when the bike is leaned onto the kickstand, and no it doesn't interfere with any passenger's feet.
Labels: DIY How to KLR650 motorcycle motorcycle maintenance PNW Rider Tool Tube winter project