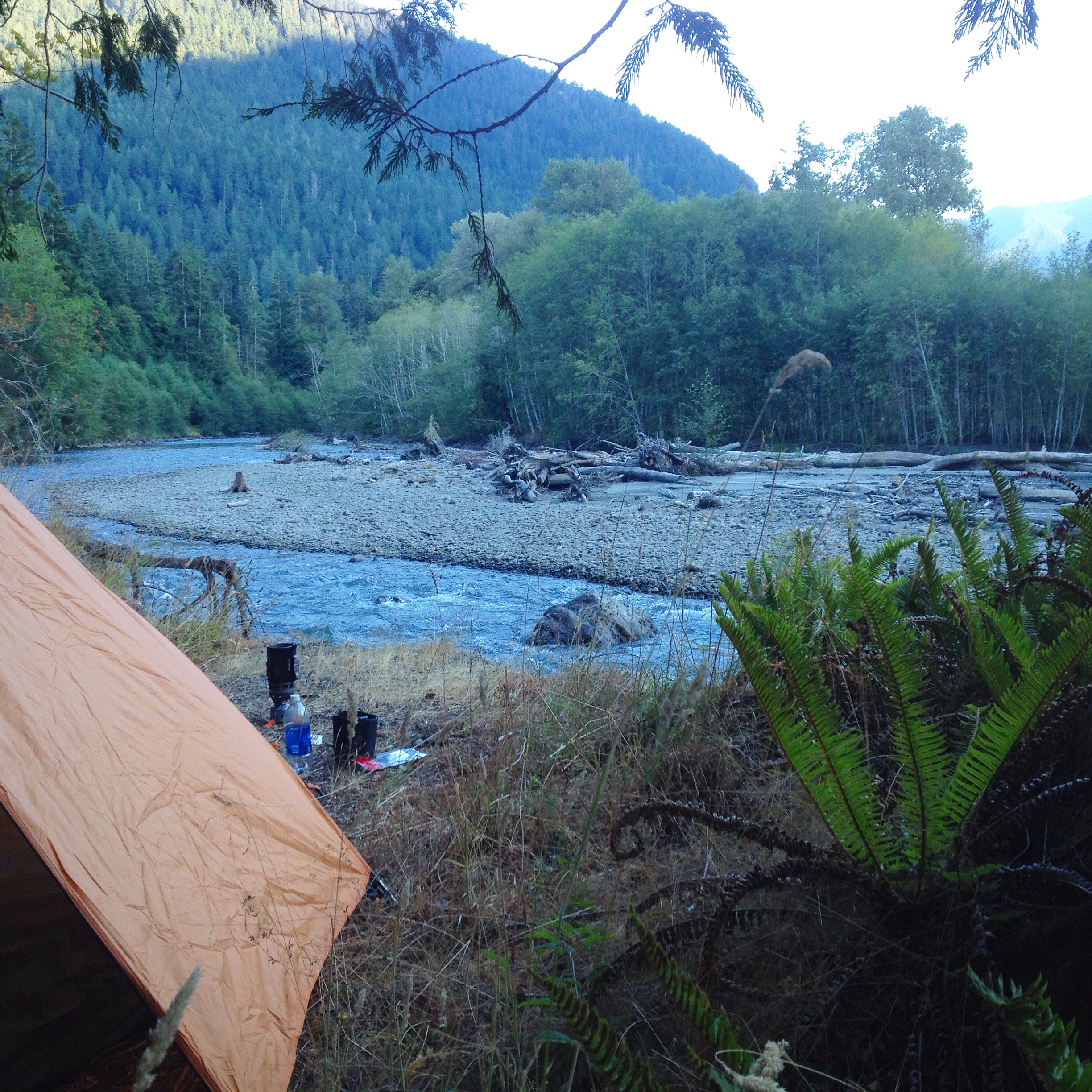 Ahhh, the Olympic Peninsula. The promised land of rugged beauty, epic peaks, and the stunning vistas to appreciate them all. I have a definitive love affair with the northwestern part of Washington. It's hard not to. Lucky me that I have a work event in Bellingham the first part of August, and as something that's becoming a bit of a tradition for me I dip out of work a few days early and ride my motorcycle up for a little camping and rallying before meeting up with my coworkers. Throw in the Dead Baby Downhill, Seattle's 16+ year running freakbike race and Party, and you know I had a damn good time. 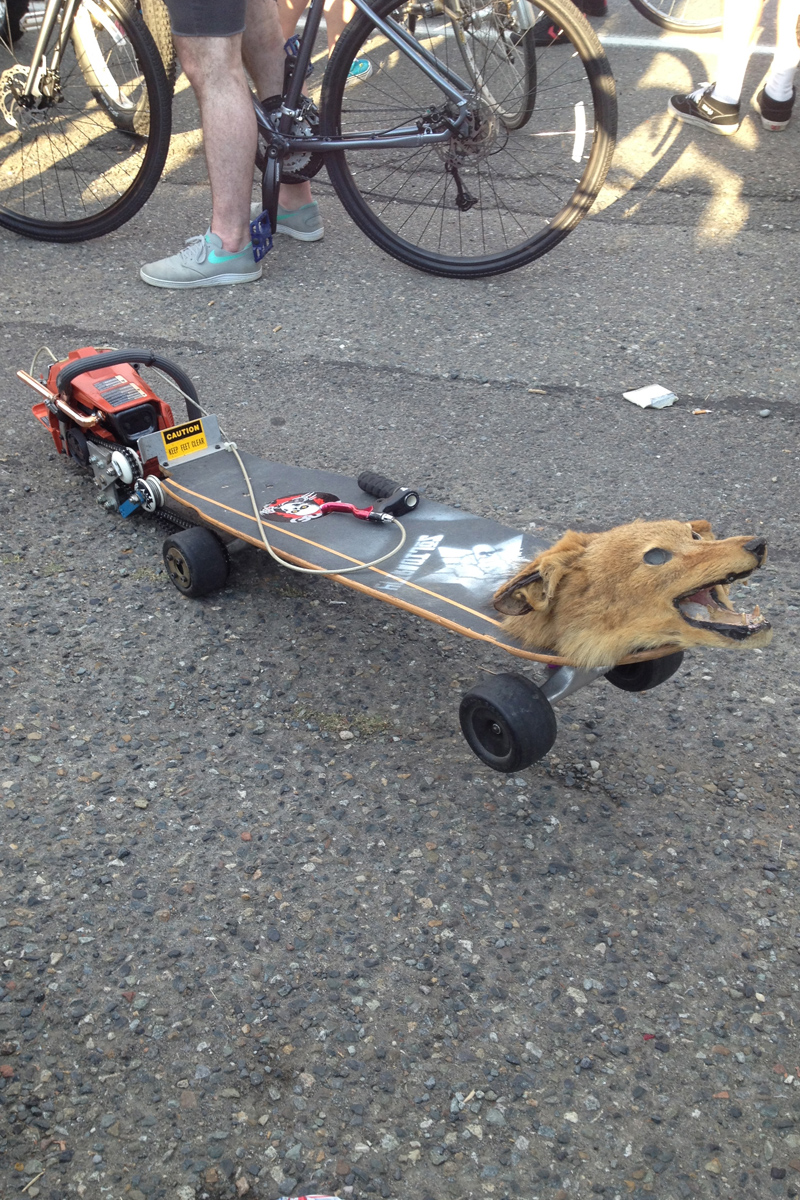 After a near sleepless night spent at the studio in Portland I wrapped up one project just in time for a client  pick-up in the morning, and dropped another off at a gallery before hitting the road for Seattle. The ride up I-5 sucked as always and my morning's running around got me into town too late for my customary Burrito and Marg from Bimbo's Cantina. Luckily I had thought ahead and made sure one of my favorite Freakbikes was waiting for me at a friend's house to expedite getting to the race start in time. 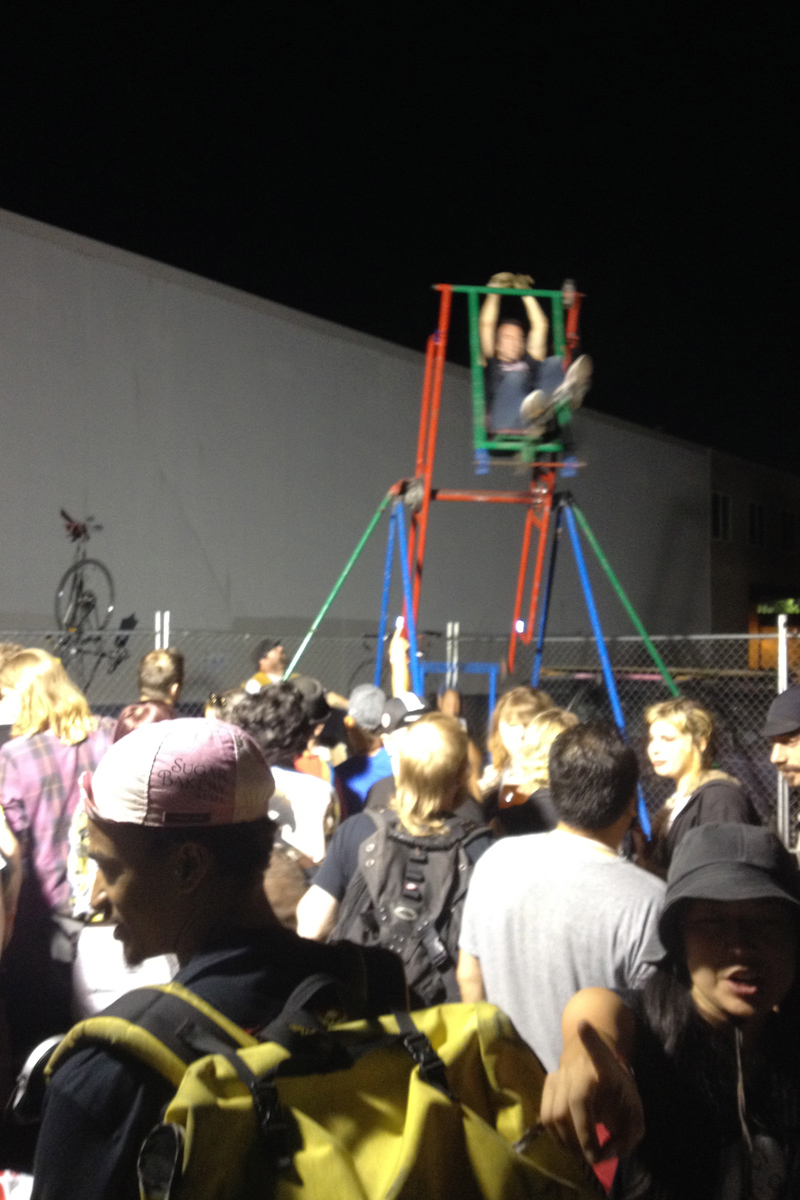 In short the DBDH is less of a bike race and more of a party. Likely the largest bicycle party on the West Coast. Thousands of people attend every year and have for many, many years. It all begins early evening at a pre-determined bar at the top of one of Seattle's numerous hills. Lots of drinking, catching up, and gawking at bikes and then one loud explosion later everyone is bombing downhill through the industrial parks and into Georgetown for the party. With pedal-powered circus rides, bands playing everywhere, bike ramps, and tallbike jousting it's a pretty difficult thing to photograph, especially since it's all at night. Besides, I was in "fun-having mode" and didn't want to cart a camera around. I recommend getting creative in your garage with a welder and a couple bike frames and then checking it out in person.

Oh, also, wear a damn helmet. A little front-flip over my handlebars led to a scraped several scrapes and a crushed phone. It could've been worse, the phone still mostly works, and I still have my front teeth so I call the night a win.

Lucky that I did keep my front teeth in tact too because the next morning I had an EPIC biscuit at The Wandering Goose. It was a perfect post-party pre-ride meal with friends. If you're rolling through Seattle and want a little taste of a heavenly blend of fried chicken and gravy soaked biscuit served by a petite girl with a knack for chalkboard menu art then THIS is the place.

With a full belly, a quick stop at REI for some backpacking food and a detailed map of the Peninsula I boarded a ferry for Bremmerton. 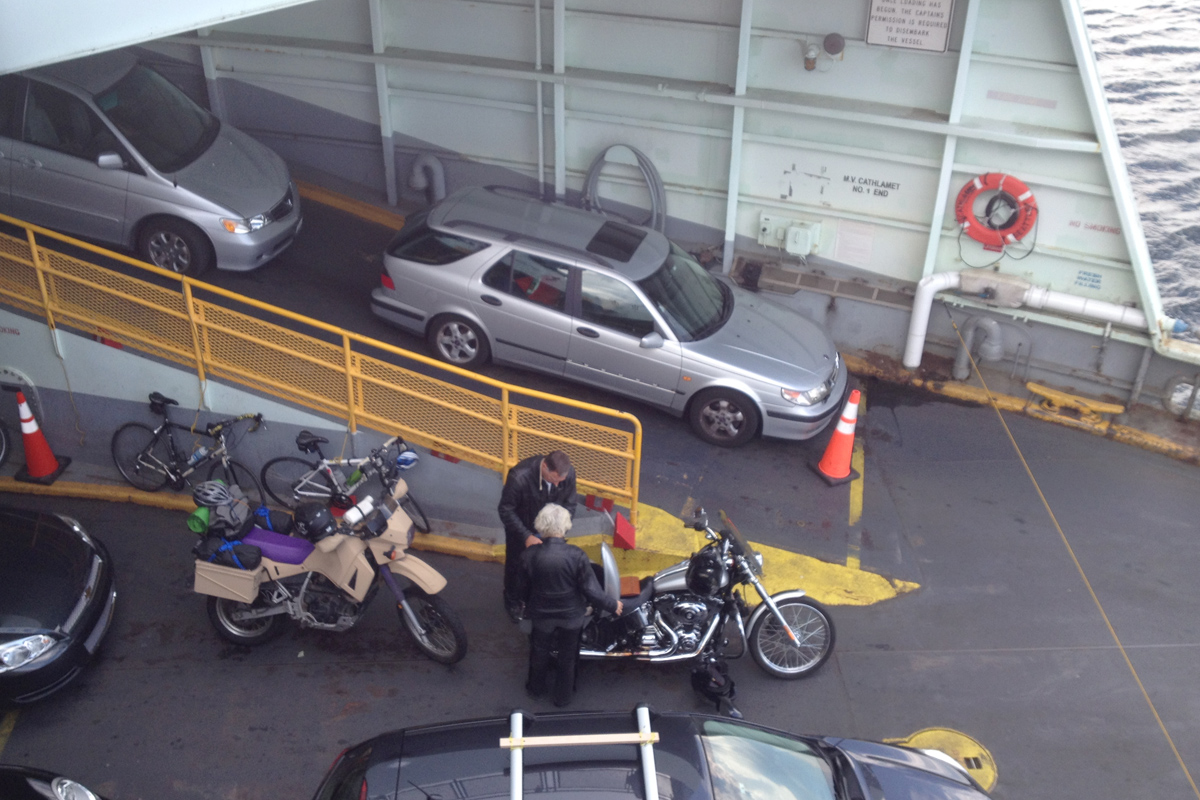 The ferrys alone are one of my favorite parts of the Seattle area. I used to take girls on dates here. For the cost of a movie you get a boat ride with awesome views of downtown and the smell of sea air. Pretty smooth, eh? 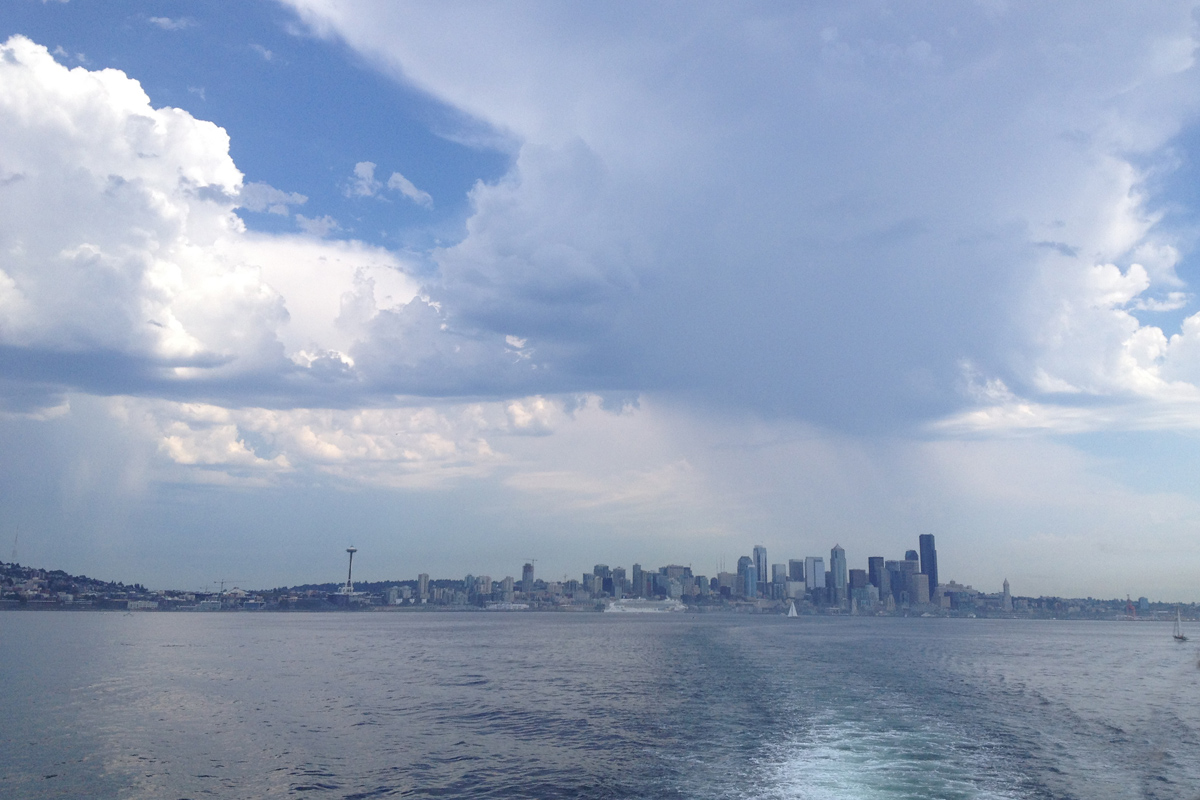 My goal was to head south out of Bremmerton on Highway 3, cut West through the sleepy waterside homes lining Highway 106, and then wind my way north along 101 to Dosewallips State Park. From there I would ride inland towards the center of the Peninsula in search of some epic campsite... 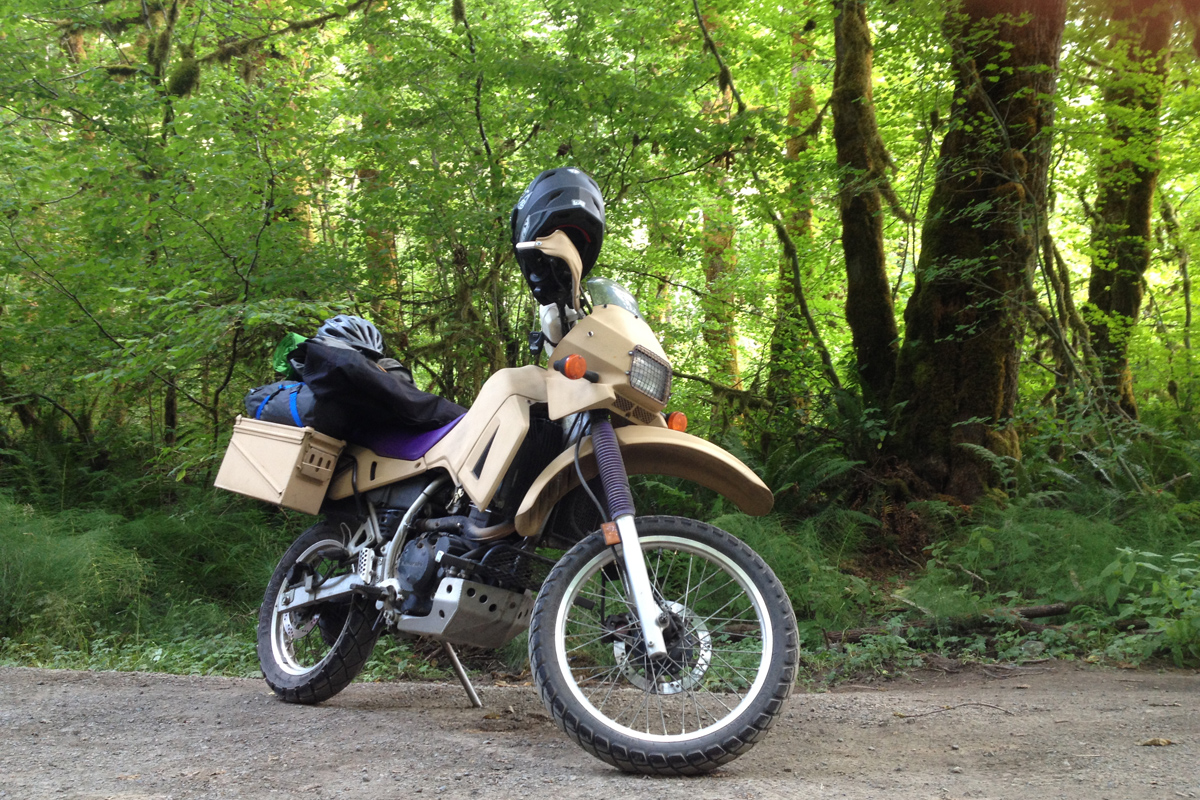 The Dosewallips River Road was actually quite a bit of fun to ride, and happily switched over to dirt pretty quickly, but sadly ended nearly as quick. I think I'd had an outdated map that suggested the road continued further, and perhaps it did once, but it abruptly instead switched over to singletrack. A hiker's wet dream, but no good for the KLR. Being that it was still early in the day I decided to move on.

I think at some point it struck me that trying to camp near Lake Crescent along the north end of the Peninsula would be a great idea. The road (westbound 101) alongside the lake is some dangerously fun riding, and the scenery is great. But pulling into camp I had the sad realization that finding an open campsite on a Saturday during the first weekend of August was probably not going to be so easy.

After getting turned away en route to Sol Duc Hotsprings things went from "not so easy" to "fuuuuu...".

"The entire park is full", the Ranger at the gate told me. Shit. Right. National Park is NOT National Forest. You can't just camp anywhere.

But with the sun setting, and less than zero desire to get a hotel room in Port Angeles, I needed to find a spot to set up my tent, and quick. There was this one road trip with friends that I recall setting up a tent behind a cement barricade alongside the highway just outside of Port Angeles, but this would not be that trip. I was on a motorcycle damnit!  I was going to find the perfect peaceful Olympic Peninsula campsite I'd been picturing in my head this whole time. And find that campsite I did...

Not one neighbor to be seen or heard. No cement barriers and highways anywhere. The only thing to listen to was the river rushing by and my rapidly quieting internal dialogue: the perfect spot to just sit and "be" for a night. A spot I never would have been able to get to had I not been on my KLR.

Dualsports are particularly adept at finding those hidden gems. Of course there can often be risks you have to negotiate. You know POTENTIALLY illegal camping, operating a motorized vehicle off road, etc. And I believe its important to be respectful of your surroundings. The logging companies who create many of the amazing roads through the wilderness that we so happen to enjoy are doing a pretty damn good job screwing the land in the process so there's no need to go making things worse.

Anyway, getting off my soapbox, hey look! The sunrise over Port Angeles! Which I was lucky enough to see as I broke down camp early (eager to get on the road before any prying eyes got jealous of my sweet campsite). 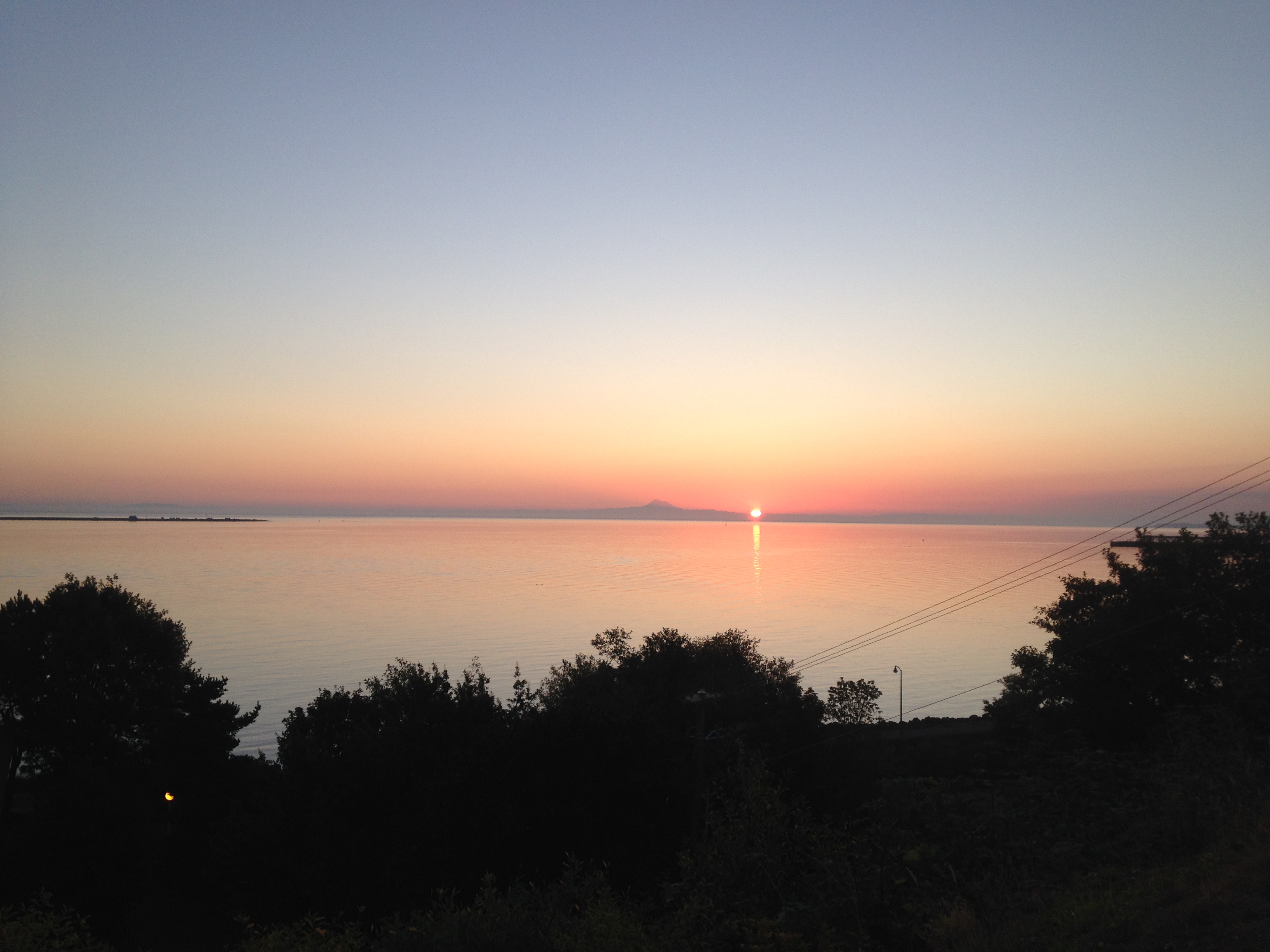 Sidenote: Riding through Port Angeles that early in the morning was like a scene from one of those Walking Dead shows. I'm serious when I say the sheer number of meth addicts roaming the streets very obviously tweaking was disturbing. Yet another reason to not get a hotel room there and leave your bike in a parking lot overnight. Truly a sad thing that's happening in an otherwise beautiful town in a gorgeous part of the country. 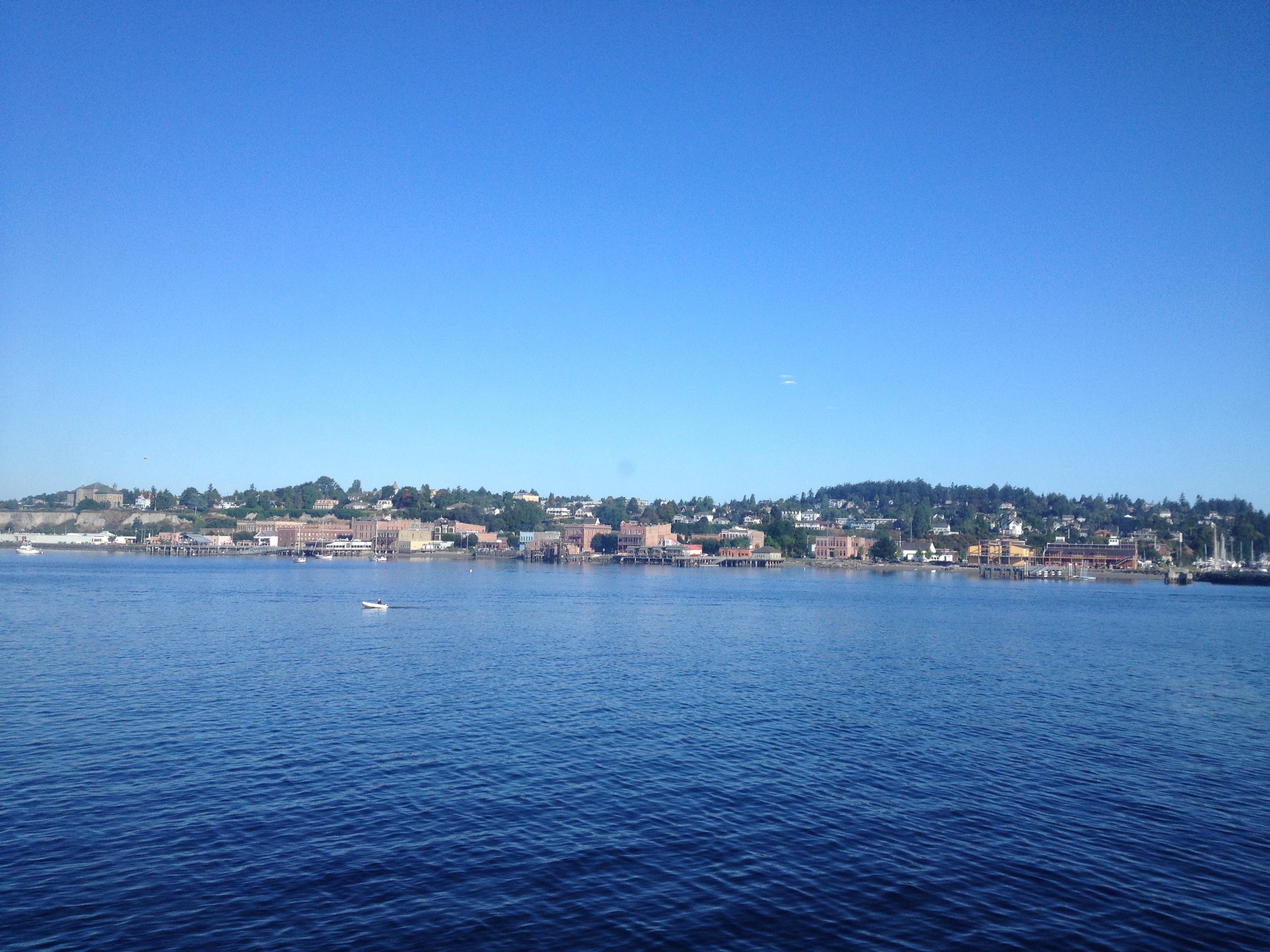 Leaving Port Angeles I headed over to Port Townsend to catch the ferry to Whidbey Island. An adorable little town with a great fort worth wandering through. Somewhere along the way I noticed one of my side fairings had come loose. Closer inspection showed I'd lost multiple bolts off the front end of my gas tank. So a quick stop and a handful of zip-ties later I was on the ferry. Always carry zip-ties. They might be more useful than a wrench.

The stretch of highway from the ferry dock onto Whidbey Island is incredibly beautiful, especially early in the morning. It makes being the first one off the boat that much sweeter. Plus it ultimately leads you to Deception Pass: 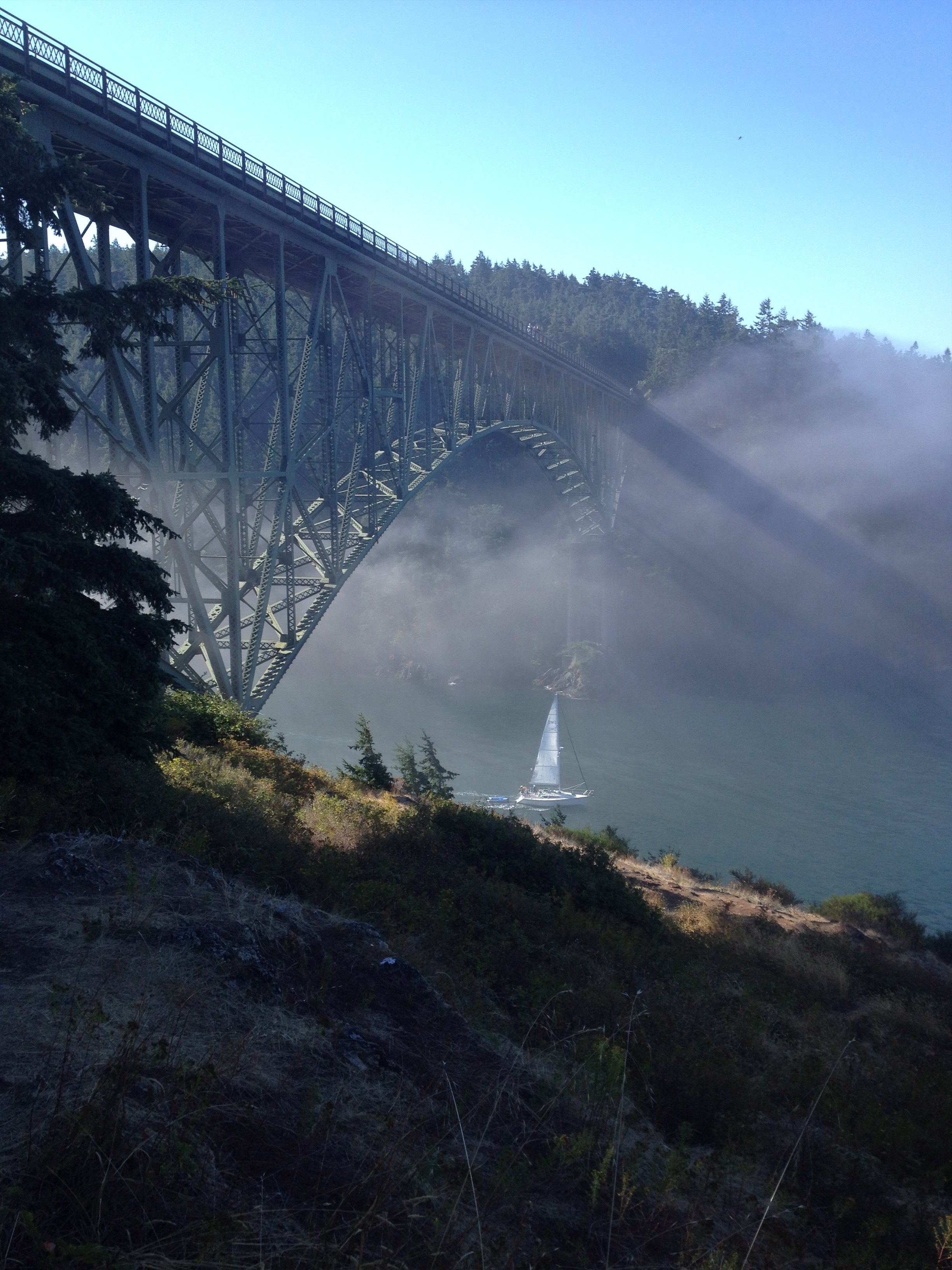 This photo was taken at Pass Island. It's worth knowing that if you want to do some wandering around up here it costs money to park in Deception Pass State Park, but there's limited free parking on Pass Island, and also just beyond (when you're headed northbound). And you should get off your bike and wander around. It's worth it. 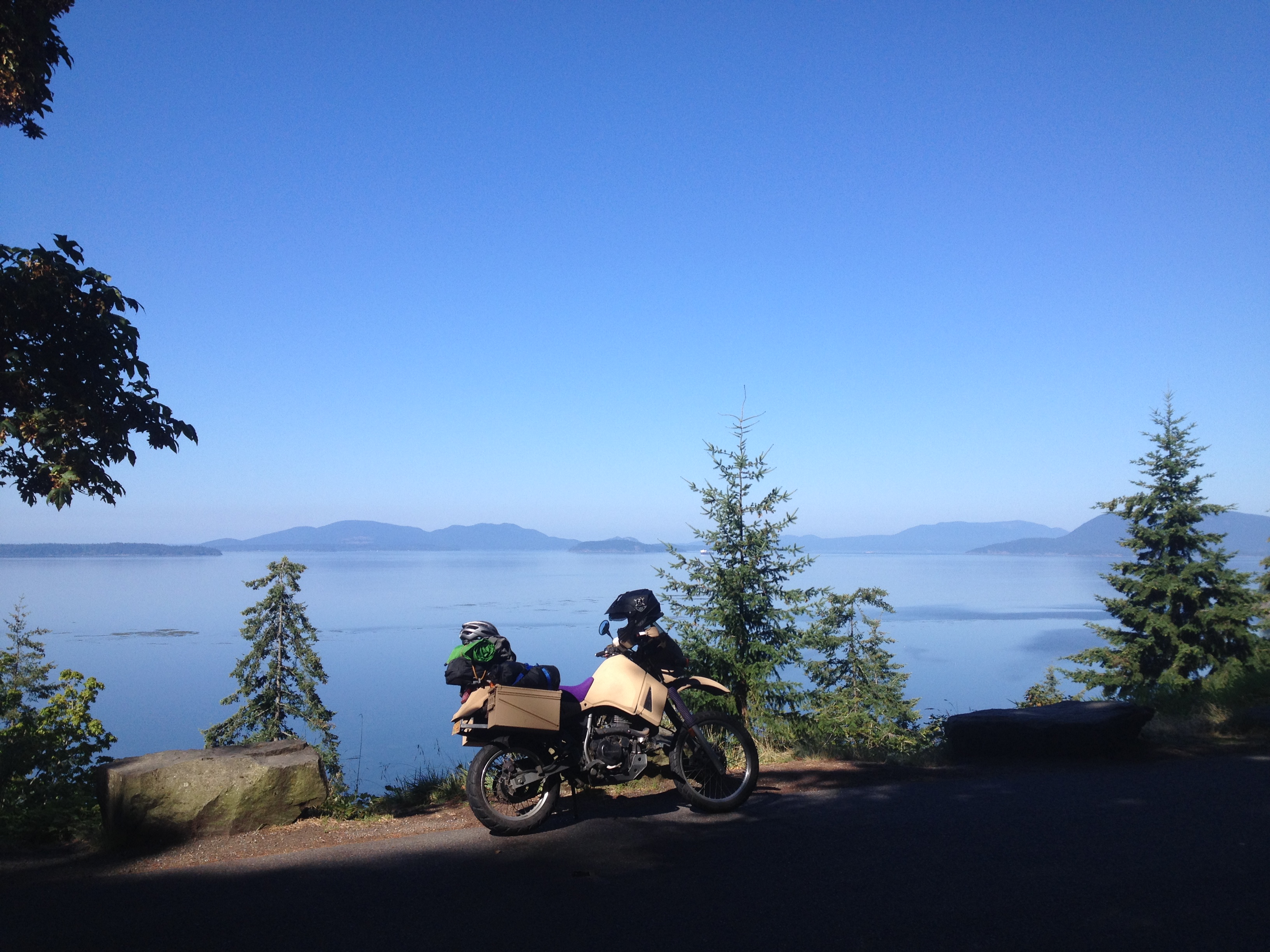 Onwards from there to Chuckanut Drive. Another great road to shred on a motorcycle. Smooth asphalt and winding curves overlooking the Sound... One of those spots that really makes you wonder why all of your buddies bail out of every ride you plan in favor of hanging around town all weekend... Chumps. Just make sure you don't get stuck behind a camper on this road and watch out for stray rocks. 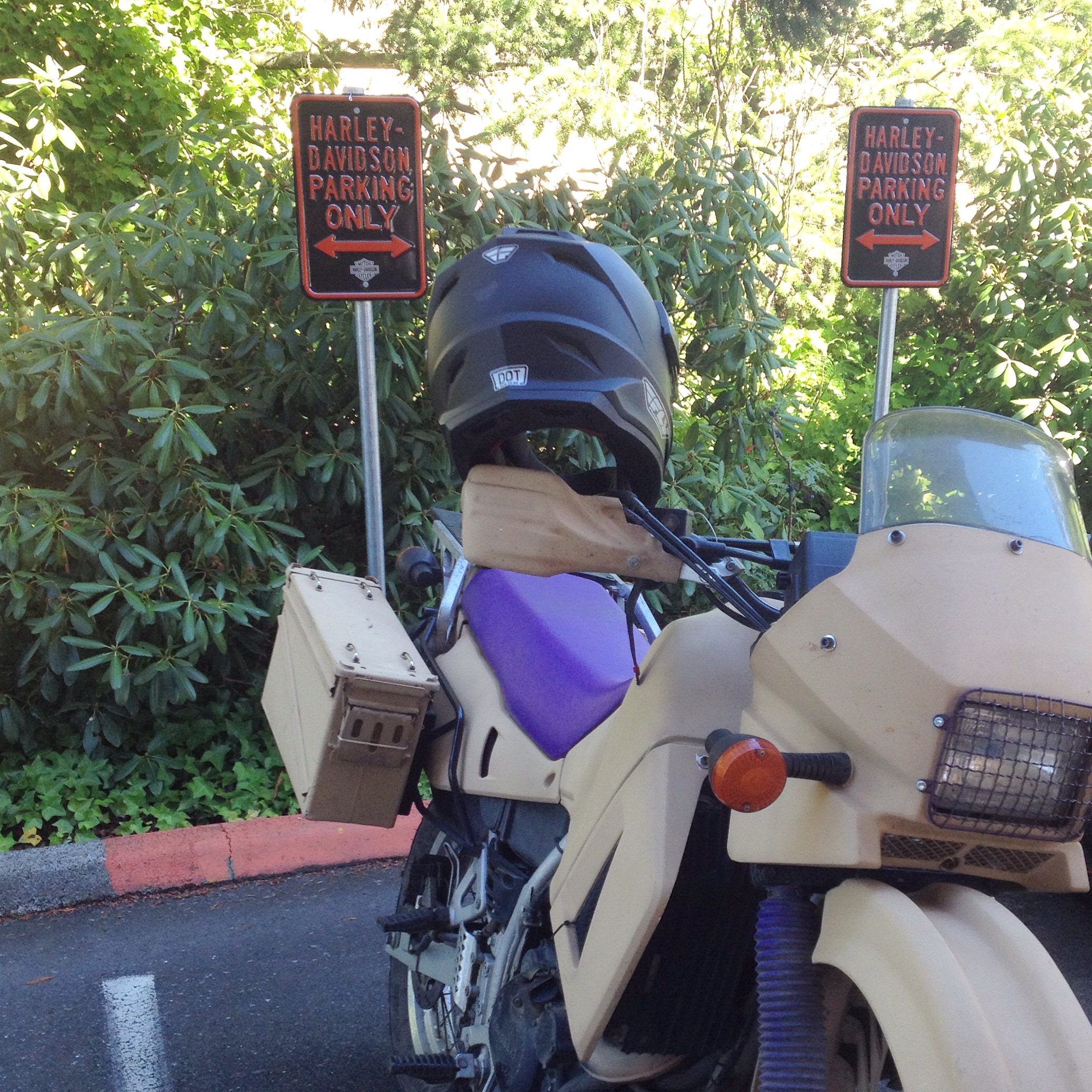 The rest of my trip was a whole lot of bicycle riding shenanigans (all of which you can read about here if you're so inclined). Certainly enough fun that I didn't mind having to park the KLR at a hotel for a couple days. Especially when you consider I got some solid riding in before hand. Cant wait till next year!
Labels: Dirt dualsport Great Northwest motorcycle Olympic National Forest Olympic Peninsula Olympics Seattle Washington