What the heck is South of The Dalles?! 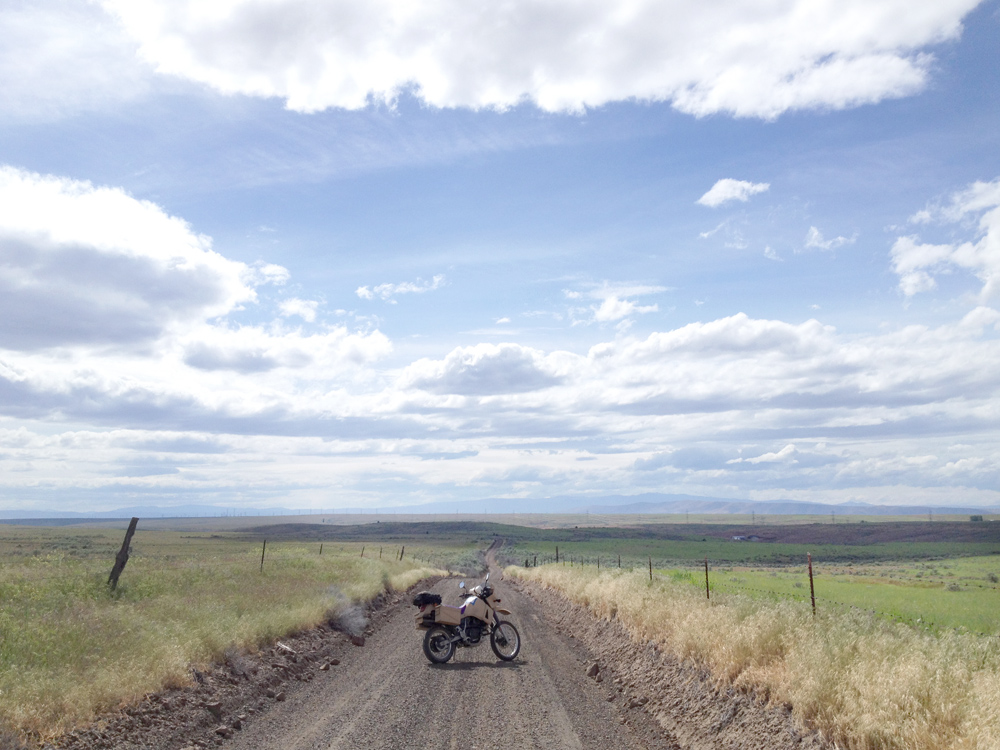 If someone were to ask me if I've ever ridden around South of The Dalles, Oregon much I'd probably replied, "No. And why the f*ck would I?". To be fair I think a lot of folks would have the same opinion. In planning trips I pour over maps for hours to find interesting roads and terrain. More often than not these roads fall into those lush green color coded areas indicating a National Forest. Much of central Oregon falls into the category of "Nothingness". Many family roadtrips through central Oregon as a kid taught me it's a barren roadless wasteland of hot, dry,  dying farmland. I wouldn't hesitate to completely skip over this portion of a map...

Leave it up to a handful of Bicyclists to prove everything I just said: WRONG.


Enter the Oregon Outback, a 360 mile cycling event from Kalamath Falls, Oregon up to the Columbia River. 70% of the ride is on dirt or gravel, and takes cyclists through a remote part of the state not often seen by most folks. And because I believe in the "Two Wheels Good" mentality I don't care so much what you're riding as much as I do WHERE you're riding it. 360 miles of dirt roads through a part of the state I never would have given a second thought to peaked my interest.

A couple good friends of mine have started an Adventure Cycling Touring Company called Limberlost, and knowing they were going to be out on the ride without a whole ton of supplies (being unsupported is a big part of the Outback) I thought a little high-speed beer delivery might make for a nice surprise. So with that in mind I settled on a loop that would cover the northern part of the route: 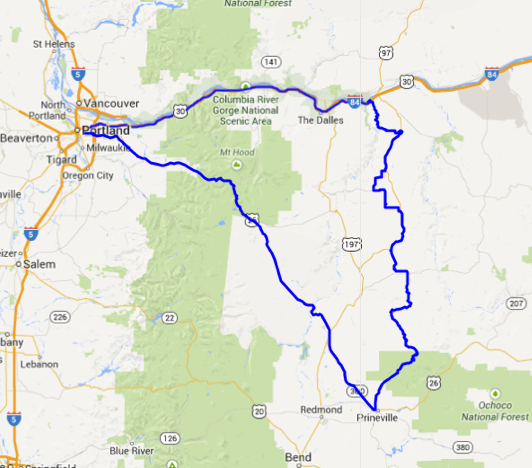 I left early Sunday morning and booked it down to Prineville where I would join up with the cycling route. I stopped to pick up food and an 18 pack of Olympia Beer (which amazingly fits PERFECTLY in my ammocan saddlebags) and headed North. (Click here for details of the route itself).

Immediately I found myself on a lovely winding road alongside a stream. The asphault was incredibly smooth and the terrain was far from the horrible wasteland I expected. Not too many miles in I started to encounter cyclists and kept my eyes peeled for the Limberlost guys. 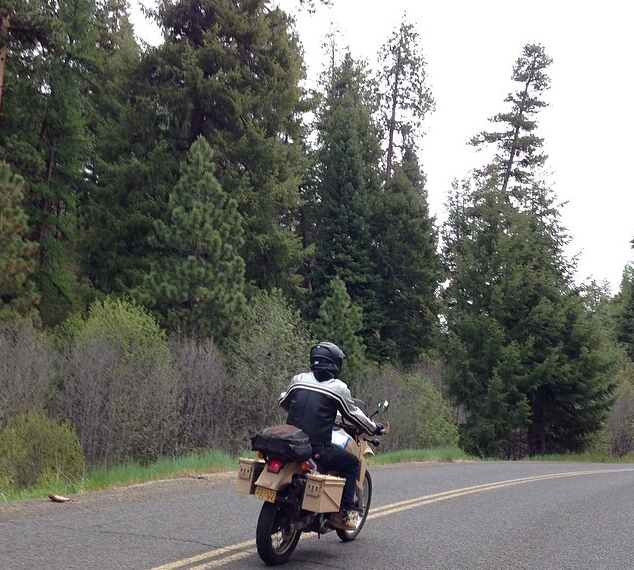 The road began to climb out of the river valley and into the Ochoco Mountains (a small National Forest I was previously unaware of. Hell, I didn't know there were mountains there!). It's not a tall pass but it makes for good riding, and doesn't take long before it switches to dirt. I passed my friends and rolled ahead to find the perfect spot to keep the beer cold until they arrived. 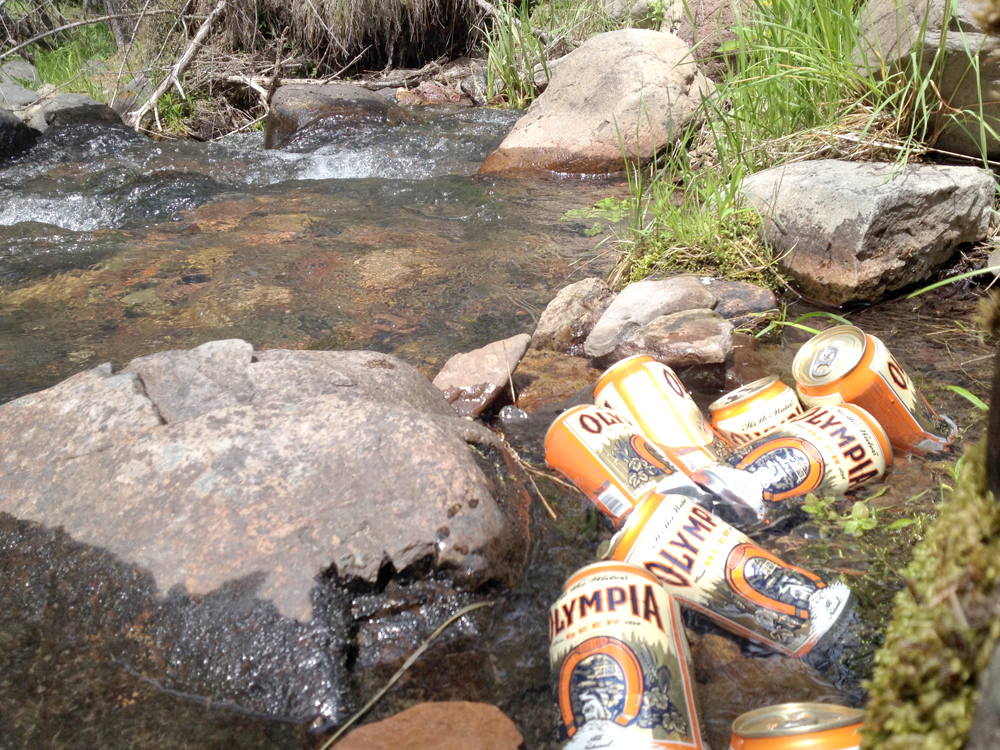 A lot of folks might think I'm a real asshole, but I like to think paying it forward like this helps dig me out of that hole from time to time. Seriously, how welcome of a sight would this be after several hundred miles of dusty bike riding? 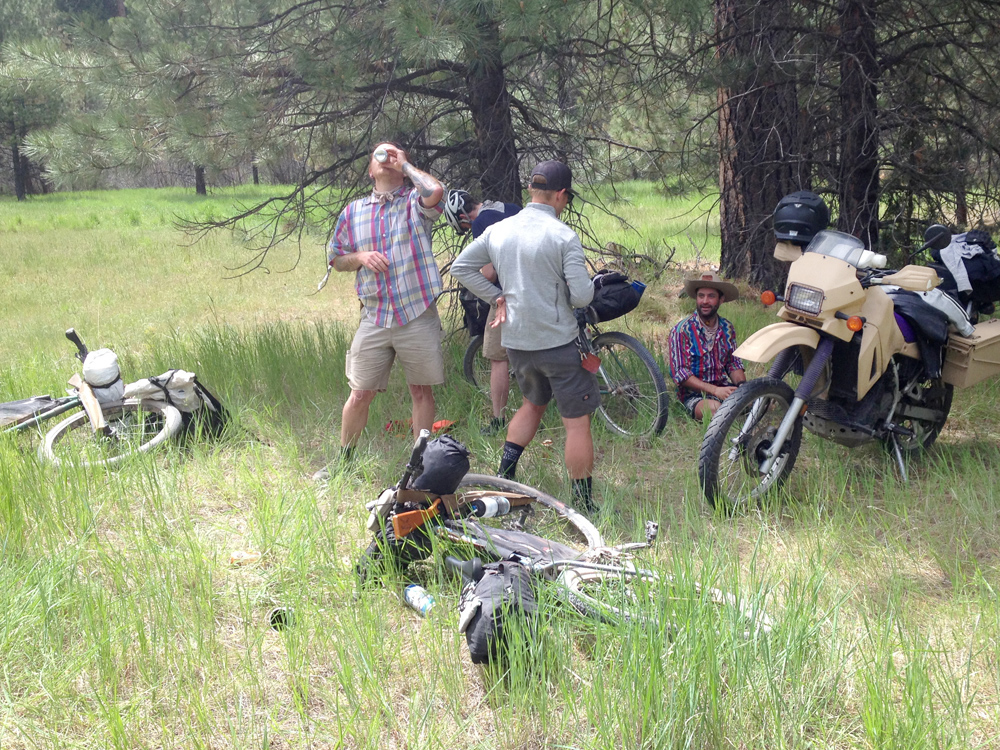 These guys don't mess around with their gear either. In case you're wondering why I'm chasing down a bunch of cyclists on my KLR, one peek at their bikes will show you we're cut from the same cloth. 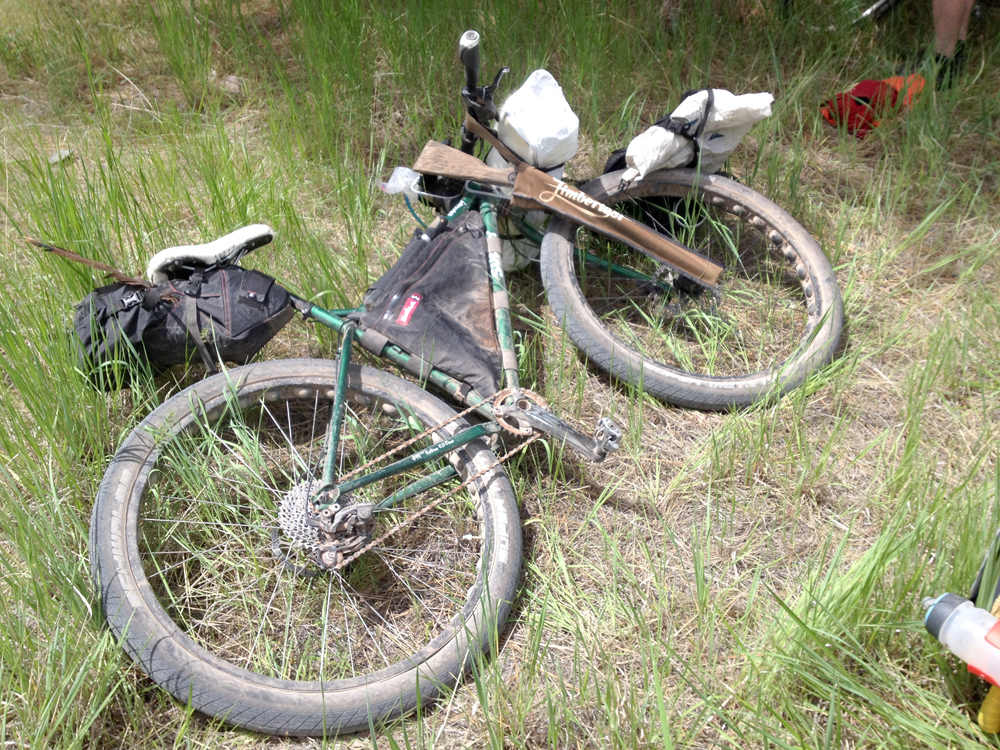 With a fair amount of the beer gone I left my friends to their ride and continued north (for the record I left the beer drinking to them. I'm not much of one for drinking and riding a motorcycle. Bicycle, yes. Motorcycle, no.). Dropping out of the Ochocos the route winds through a greener-than-expected valley with numerous shallow stream crossings, and scattered farms. Kind of quaint in fact. 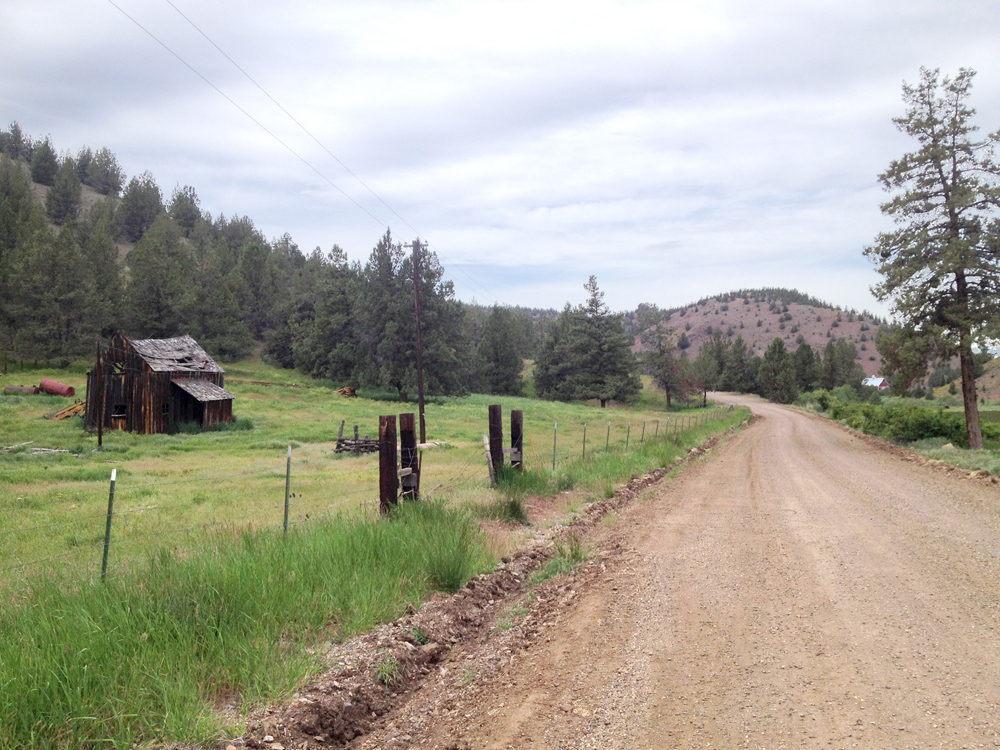 A few more miles down the road and I found more cyclists to pass off the rest of my beer too. To set the scene these three guys are in the middle of nowhere riding up a dusty hill climb and some random dude on a motorcycle rolls up next to them... 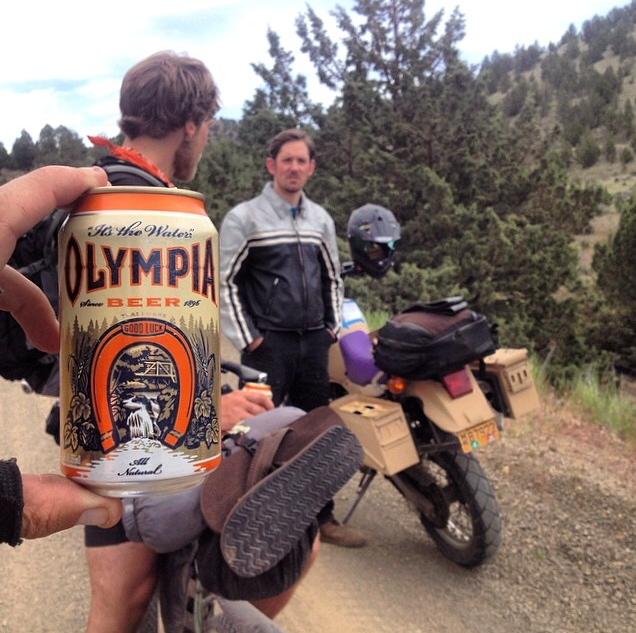 The far northern portion of the route moves onto the plateau's surrounding the Columbia river. They're pretty amazing in their own right. Thin ribbons of road cutting across wide vistas. Pretty decent gravel riding too. 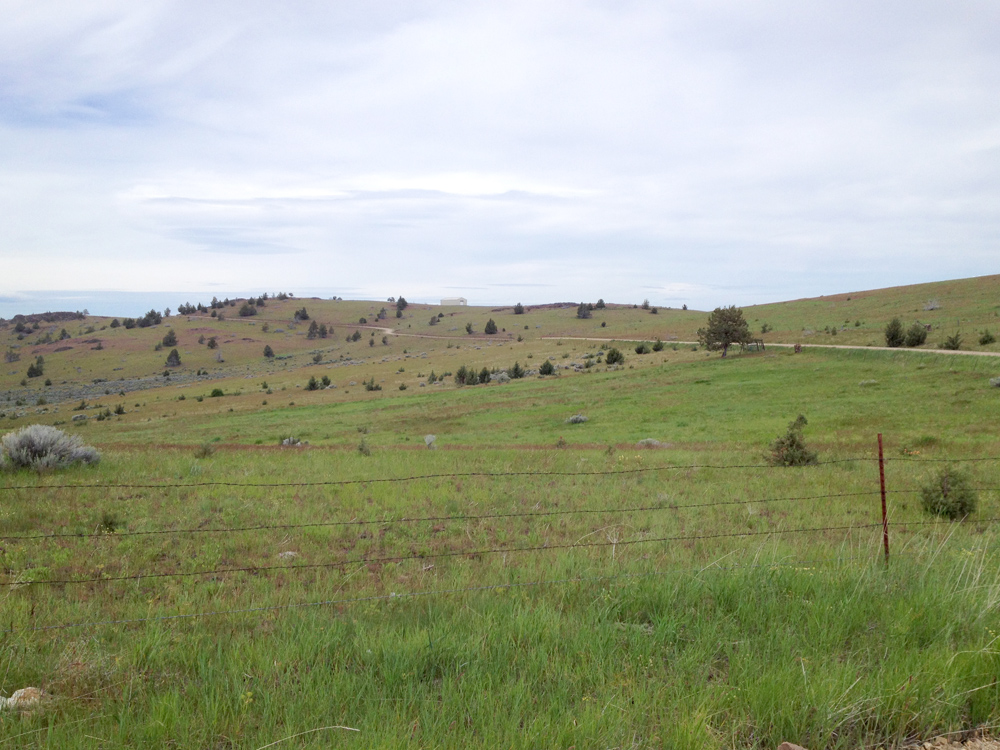 Certainly not without some sick uphill curves: 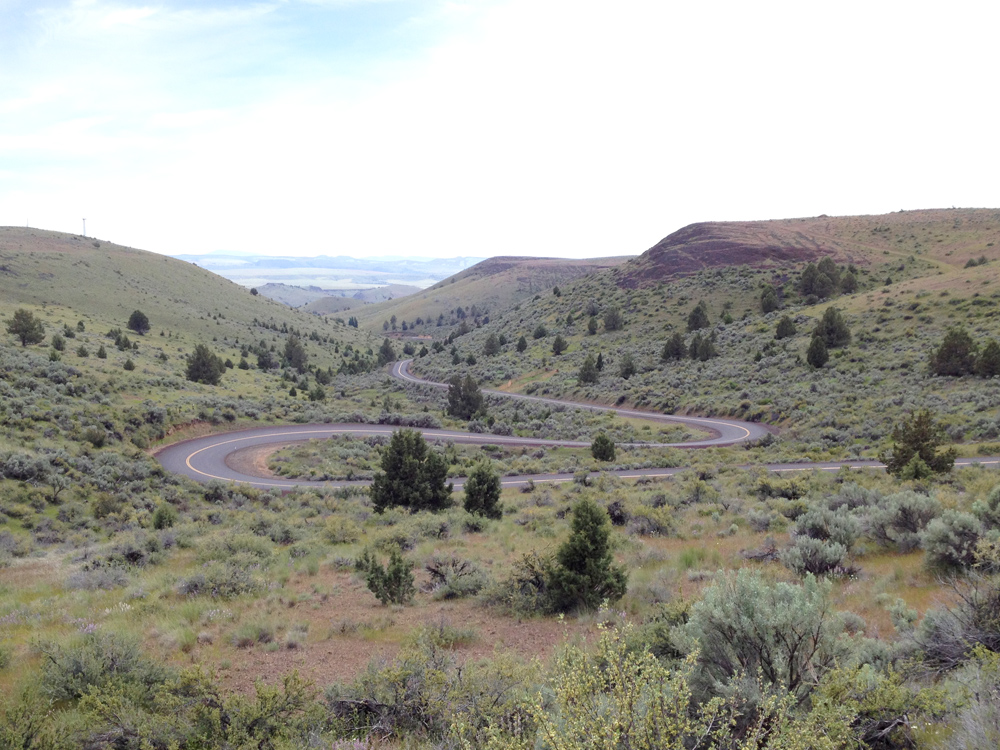 It gets pretty windy and desolate, but there's a unique beauty in that. 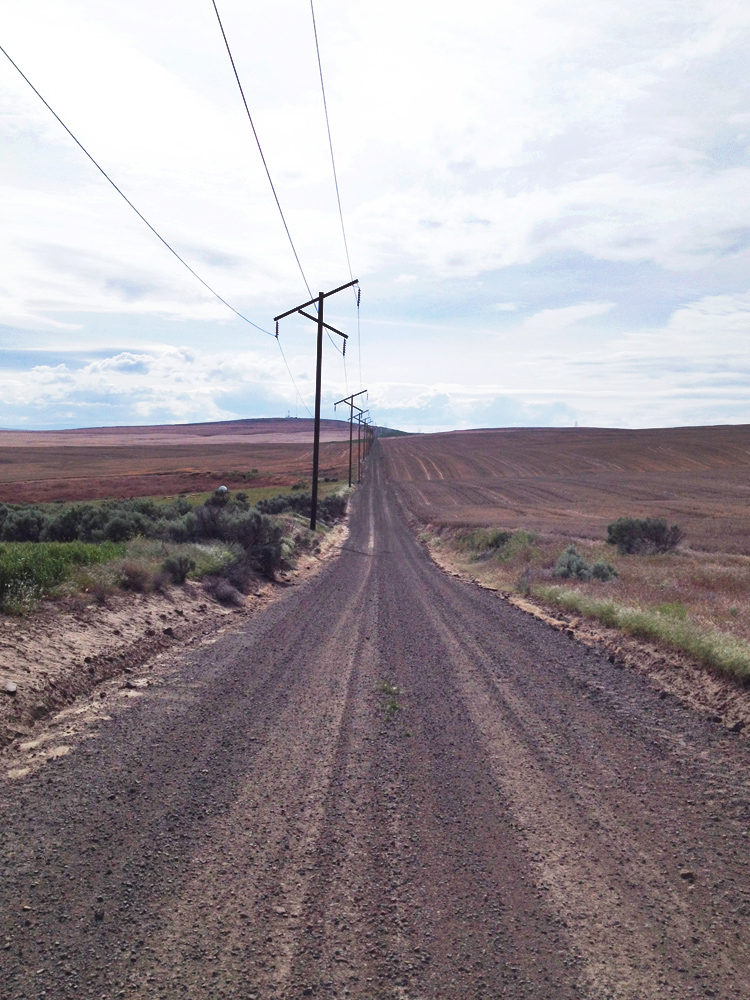 And the view from atop Gordon Ridge is nothing short of breathtaking. 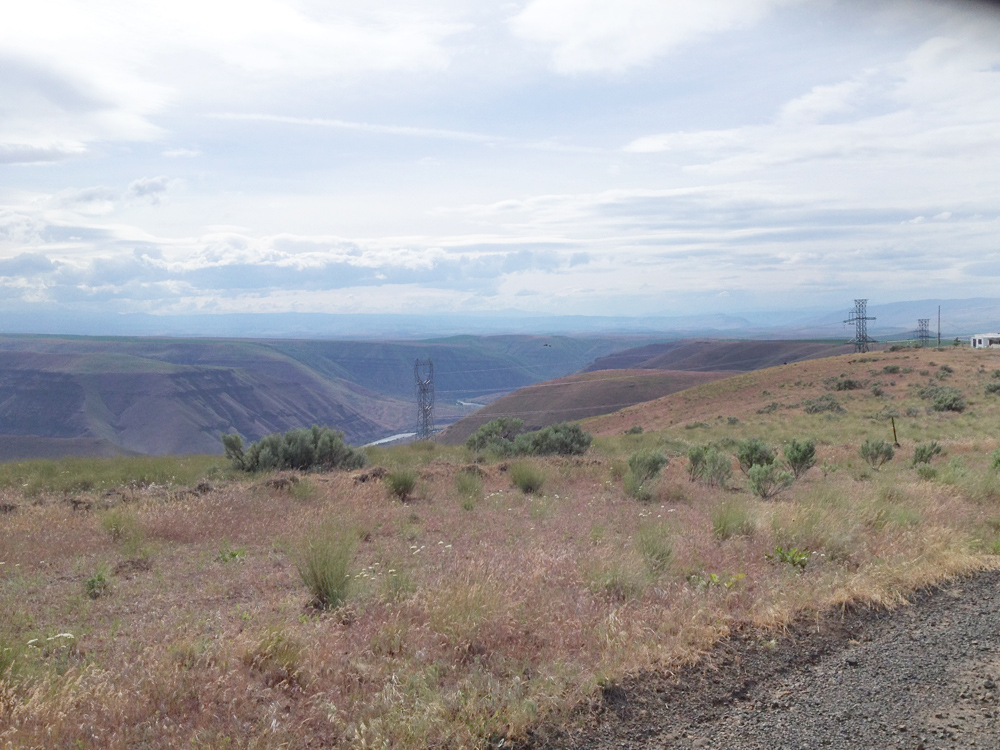 Dropping down into the Gorge I headed west on I-84 to Hood River for a food stop at Double Mountain Brewery. Full Sail happens to be out there too, but the wait at Double Mountain was a fraction the time, and there was motorcycle parking right out front.

I learned a lot on this ride. Mostly that it's best to step outside the box, look at where others are riding, and never say no to a remote section on a map. I'm definitely interested in the southern section of the Outback, and hope to get back over to the Ochoco's for some more quality exploring. All this for a quality day ride out of Portland, Oregon. Those cyclists know where to look for a good time. After all, Adventure doesn't care much if you have a motor.