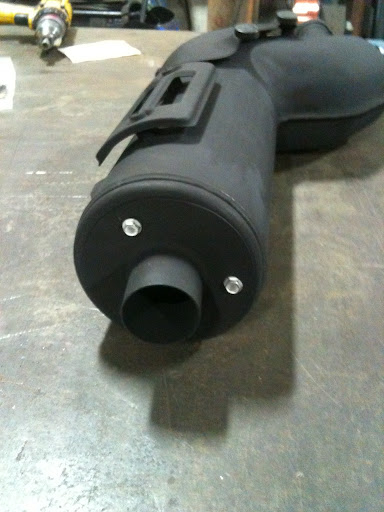 Most KLR riders are familiar with the distinctive "chirp" of it's exhaust. It's less blatant in the new generation of KLRs but the older bikes chirp like a flock of drunken finches, and honestly I hate it. Ditching the KLR's iconic exhaust sound is something that's been covered on many online forums, but here's my take on on it.

If you enjoy the chirp then just stop reading... Unless you're into that whole morbid curiosity thing.

The easiest solution would be to buy a new slip-on exhaust. Believe me, I'd like to. The stock exhaust doesn't sound great (chirp aside), it's heavy, and really bulky, but my ass is broke, and besides I really like making cool shit, so why not have a little fun here?

First a little background. Why does the KLR chirp? In my experience it's a combination of a couple of things. First the single cylinder primes the backpressure of the exhaust for a consistent pulsing (they don't call 'em "Thumpers" for nothing). Next there is a secondary baffle inside the muffler which has a seam along the bottom. For the riders who live in dry arid environments and consistently go on long rides their bikes tend to not develop too severe of a chirp. The bikes that exist in more damp environments, or even moreso the bikes that tend to be used on shorter cross-town trips develop a strong chirp. This is because condensation gathers along the seam of this secondary baffle and never has time to evaporate (ever seen a bit of moisture come out of your exhaust right after you fire your bike up?). Eventually it rusts the seam out creating the perfect slit for that thumping backpressure to chirp air right through it.

So I decided to remove the damn baffle altogether. I hoped it would improve airflow and give me a bit more high-end power. Downsides? A slightly louder exhaust (I don't actually think this is a downside), and a slightly worse fuel economy when you're really rallying (Over 65 mph).

So I ripped the exhaust off, and gathered together the following supplies (yes, it helps if you have the ability to do a little welding too): 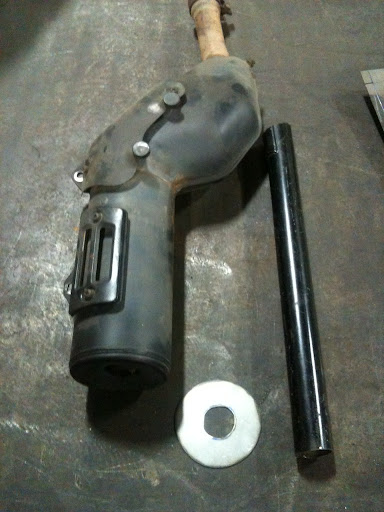 First I pounded the piece of wood into the existing baffle. I used it to help the hole saw track straight into the end of the muffler. An appropriately sized dowel would be ideal. Next I slowly bored out the back of the muffler. Gratuitous application of cutting oil helps this process. Next I extracted the baffle. I'd have posted a picture of the baffle but the chirpy little bastard was systematically destroyed upon removal.

Next a little cutting of the bike tube and a little welding to taste: 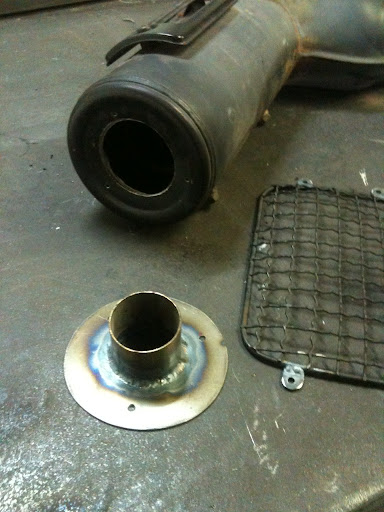 Yes, that is the headlight guard off a toyota pickup... So what if I retro-fitted it to the front of my bike...

Next I took a moment to wire-wheel the exhaust and clean off a lot of the old crap and corrosion. It's tough to get all the mud off all the nooks and crannies sometimes. A thorough application of the high-temp black paint cleaned up all my handywork. 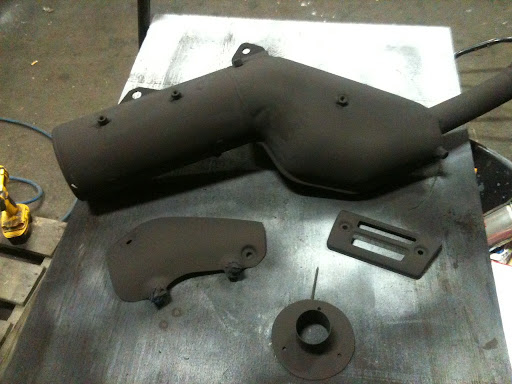 My new exhaust tip was then installed using self-tapping screws. The photo shows three, but I ultimately used 6 for amore secure mount. There are other creative ways to attach it, but I happen to enjoy the slightly more industrial look of the screw heads.

It is also important to note that in this trial run I did not install a spark arrestor.  This has since been done, but at the time I was in a rush to get out and try the bike and wasn't planning on taking it into any national forests until one had been installed. 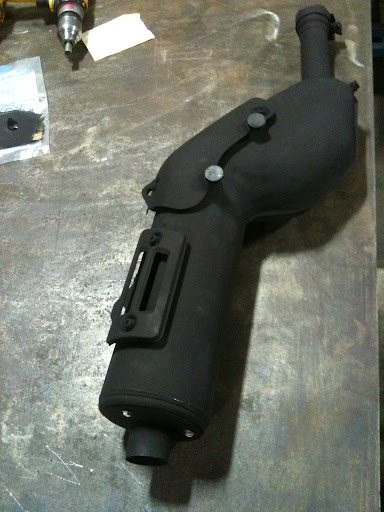 The end result is a throatier custom sounding exhaust with a noticeable amount of power increase at higher RPMs. The chirp is 95% gone, and it didn't cost me more than a couple of bucks which makes the whole endeavor a success in my book. Try it out and get busy on making your bike your own.
Labels: Kawasaki Ninja KLR650 motorcycle project time